06G Red had a great weekend advancing out of their bracket to the Finals. During bracket play 06G Red defeated SA Buffs 1-0, Beat Dallas Toros 2-0 and lost 1-0 to Prosper Elite.  That earned the team a rematch vs Prosper in the Final.  In the 18th minute the Austin Texans were awarded a Penalty and Camilla Aguilar stepped up and drove it home for the 1-0 lead. Prosper fought back and late in the game scored to tie it up 1-1. The game went to penalties to decide the winner. After going back and forth Prosper ended up winning 4-3.  We are very proud of the 06 Red. Congrats to the Austin Texans 06G Red as Finalists in the Alamo City Cup!

The 07s played up in the top 06 bracket 11v11 playing Alamo City 06 Silver and won the first game 7-0.  The game took a while for us to get into it as we tried to understand our opponent.  The half ended 2-0.  There was some very nice combination play where we connected often 4-6 passes in a row.  Second half we blew it open scoring five goals.  We allowed very little opportunities for the opponent to shoot much less score.  Later that day We played 06 McAllen Dynamo.  Game was tougher due to second game of the day.  We started slow but we were able to connect and the other team was fighting hard to not get scored on.  Half ended us up 1-0.  Second half we started better with some slick Barcelona type passing and ball movement.  Possession was incredible and best I have seen all year from us.  We scored two more goals to win 3-0 to advance to semifinals.  We played LBK 06 in the semifinal sunday morning.  We went down 2-0 in first five minutes and were still asleep.  Mental mistakes was the key to the goals not from creative play by LBK.  We settled down and scored right before half to end it 2-1.  We imposed our will on the LBK and missed many other opportunities and only allowed them long ball counterattacks that amounted to nothing.  Second half started like the first half ended with us pinning them in and forcing them to chase the ball with our great possession.  Missing two good opportunities was tough to see but was encouraged we could get the equalizer and maybe win in.  In the last 10 minutes I went to three in back and played with another forward.  This generated multiple times to score but we did not.  We limited them to kick ball clearance which we dealt with.  In last two minutes with us pushing for equalizer they got another kickball clearance and scored a goal that ended the game 3-1 eliminating us.  The passing from the 07s playing up in top 06 bracket at times was breathtaking.  Some of the best soccer the 07s have ever played as they go into 11v11 soccer for next year leaving the 9v9 U12 age group into history.

The 08s competed in the top bracket of the tournament. The tournament started with the girls playing 08 TNT from Dallas.  The Dallas team was big, athletic and aggressive.  They had some skilled attacking players that made it more difficult.  Our normal passing had found difficulty due to the high pressure.  The half ended 2-2,  The second half started better with our passing but found ourselves down 4-2 before we scored with five minutes late to make it 4-3 them.  We hope to make it to final to play them again.  Second game was against Sting SA needing at least a tie to advance.  The field was bumpy that upset our ability to connect passes consistently.  Half ended 1-1.  Their keeper was incredible.  Making several saves to keep us from scoring more.  They had some creative players that did make it difficult at times.  Second half started with us dominating but went down 2-1.  I made some personnel positional changes and we leveled 2-2.  The girts continued to push for the winning goal and we found it with 1 minute left to win 3-2 scoring twice in the last 7 minutes.  Very exciting to progress to the semifinal.  The semifinal was against Toro Black. We started well and never let up.  We scored four unanswered goals before the official awarded them a penalty which they scored.  We were better in all facets of the game.  Physically (which official would call very soft calls for our aggressive play), technical and tactical.  We were able to connect many passes with many different players scoring.  In final we met the team that beat us in the first game, Dallas TNT again.  First half was tense and very competitive.  They hit the pole twice and us striking it once.  We got a free kick in dying moments of first half and the free kick was well struck and found its way in for us to go up 1-0 at half.  The half did show us to be more ready to deal with their physical play and creative forwards.  Second half we blew the game wide open  we scored three more goals to go up 4-0 with each goal being different in how it was scored.  Creative passing switching the ball and 1st touch allowed us to lead.  We did have one mental break down where the other team found the net.  We added one more goal late to win the championship and get our revenge 5-1.  Very sweet considering the Dallas team was a bit smug after the first game against us, but we showed emphatically who the better team was. 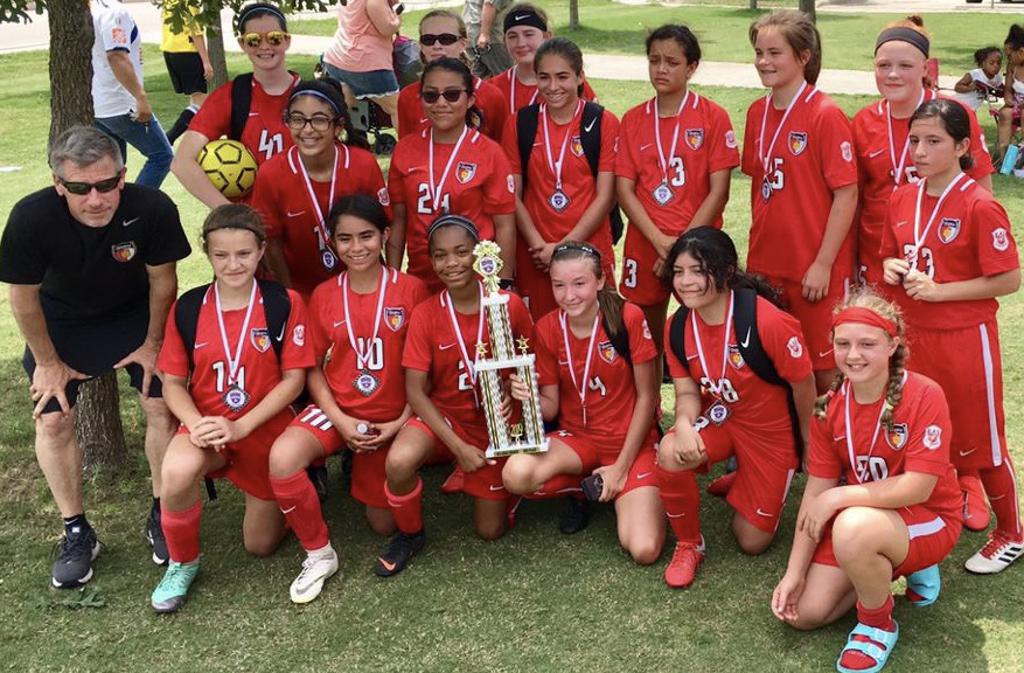